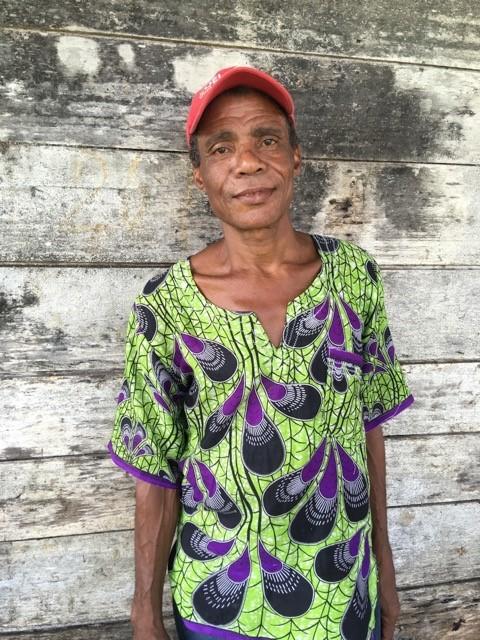 Eduardo lives in Mendes da Silva, south of São Tomé town, deep in the tropical rainforest. He was born in 1959 and is married with seven children between 10 and 38 years old. The youngest are at school, and the oldest three are now cocoa farmers like their father.

Eduardo’s farm is about six acres, and he says he’s currently producing around 930kg (approximately 1 tonne) of wet cocoa on average per year.

He joined his local association in 2009, right from the beginning when the Fairtrade and organic certified co-operative CECAQ-11 helped the farmers set it up. In addition to helping organise farmers, Eduardo said the initial benefit of joining CECAQ-11 was the fact that farmers get paid twice: once in advance for wet cocoa and a follow-up payment when the cocoa is dry.

Since he joined, he has enjoyed many other benefits, including good organic farming training, help funding inputs, access to new cocoa seedlings, and opportunities for loans.

He and his fellow farmers have also invested their share of the Fairtrade premium in improving their facilities and equipment for fermenting and drying their cocoa.

When the association was first established, Eduardo was elected as association Secretary. He explains that his fellow farmers had already seen him performing a similar function in the arrangement that existed before CECAQ-11 came along. “They considered me a good leader, a good recorder, and good with accounts,” he says. They have voted him as Secretary again since.

Eduardo says the best thing about being a cocoa farmer in São Tomé is that “[the farmers] respect the standards of quality and the benefits of organic production, so they know their cocoa is excellent, and they are proud of it!”