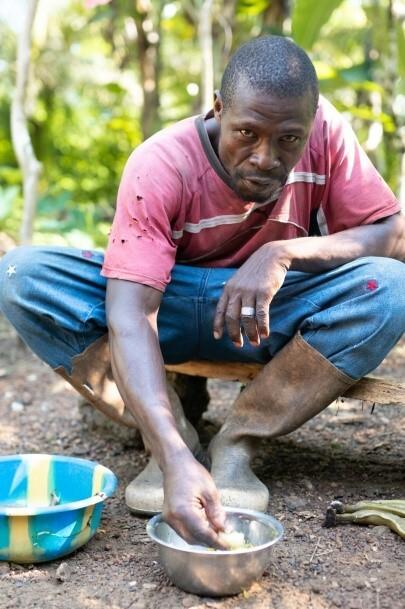 Sidie is part of a Fairtrade co-operative called Ngoleagorbu, which means ‘we who live by the forest edge’ in Mende, one of the local languages of the region. Ngoleagorbu was supported to come together in a multi-year project co-funded by Divine Chocolate

“Ngoleagorbu cocoa farmers are Fairtrade co-operative farmers, which brings many benefits. For example, previously when we were not organised as farmer co-operatives, we weren’t selling our cocoa for a good price. The buyers we used to sell to had more power over us and would under-value our cocoa. Now we have the bargaining power of the Ngoleagorbu cooperative, our price has increased.”

Sidie reports that they used to receive 7,000 Leones per kilogram of cocoa, but this has more than doubled to 15,000 Leones, thanks to being part of Ngoleagorbu. This has helped Sidie and his family to have a better quality of life.

Another benefit of Ngoleagorbu is the training that has been introduced for all farmers in the co-operative. For example, Sidie has received training from the group on how to achieve better yields through an improved pruning process and regular ‘brushing’ (cutting down weeds) on their farms.

Further Ngoleagorbu-led improvements have been implemented into Sidie’s farming that have both improved the yield and the quality of his cocoa beans: “During harvest time, we cut down the pods, separate out any bad ones, and break open the pods, pulling out the cocoa beans in their natural moist coating. We ferment the beans in baskets made from banana leaf for around 6 or 7 days. Then we lay them out for drying in the hot sun to allow the flavours to mature. When we were not part of the farmers’ organisation, we used to dry the beans on the forest floor. However we were taught how to dry the beans on specially-made drying tables, which is both easier for us as well as giving us better yields, as the beans have better ventilation, meaning fewer rotten beans. Drying in this way also improves the quality of the beans as the raised tables stop foreign materials from contaminating the beans. ”

Sidie is keen to point out that his cocoa farm is organic: “Ngoleagorbu cocoa farmers don’t use any chemicals in their farms – we have stopped using all the sprays.”

And he has also been trained to use intercropping techniques to bring in income when areas with young cocoa trees are not yet bearing fruit. “We were taught to do intercropping. You see, cocoa trees take a long time, like 4 to 5 years, before they start bearing. So during this time we plant banana, plantain, and pineapple trees which can crop while the cocoa trees mature. We are using all our acreage to be commercial, to sustain ourselves, until the cocoa starts to bear.”

Extra benefits come from the farmers coming together as a group to share labor. For example, when it is time for the all-important “brushing” of the farm – a labor-intensive weed cutting process carried out 3 or 4 times a year – the farmers help each other out, rotating around the farms to get the job done more efficiently. Previously they had to pay other laborers to help out which was more costly.

Sidie has a very deep respect for the rainforest where he lives and works: “The rainforest protects us by cleaning the air we breathe and providing fresh water for our farms and communities. So we protect the forest. We don't farm there, we don't log the trees, and we do not go there to fish or hunt.”

The Gola rainforest of Sierra Leone is now an officially protected nature reserve, and Ngoleagorbu supports its farmers to preserve the natural ecosystem. Ngoleagorbu helps to enforce more humane ways of dealing with the many chimpanzees, who sometimes come onto the cocoa farms to eat the delicious cocoa pods! Sidie shared with us exactly how he deals with the pesky chimps: “Before we used to hunt the chimpanzees and do them harm, to protect our crops. Now we are just as effective, but without harming the chimps. Wwe have an iron drum to beat, so we scare the animals away.”

The way in which cocoa trees grow as an integral part of the forest (rather requiring destruction of the forest), is also important for wildlife. Sidie explains: “One of the good things about cocoa farming, you can see animals all around. Our farm provides a kind of movement for them, compared to rice farming. If you’re doing upland rice farming, the whole area will be deforested, which is bad for the animals. With cocoa farming you can see animals roam the forest, the chimpanzee can come, the birds and other animals are passing around, going through the forest. That’s part of why we love cocoa farming.”