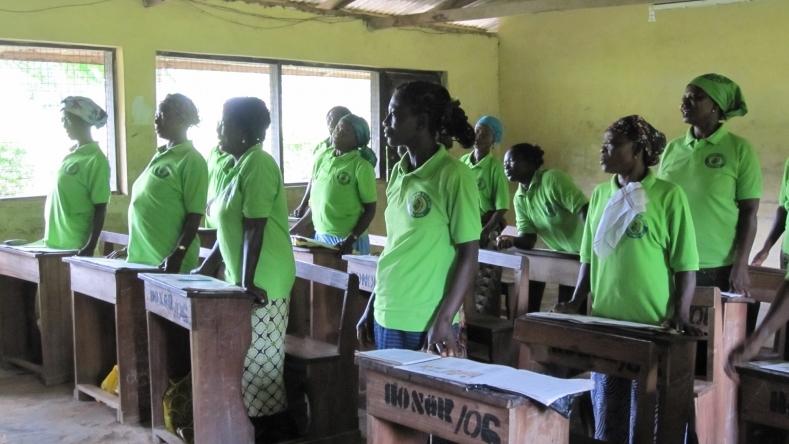 Since 2014, Divine and Kuapa Kokoo have had a continued focus on literacy and enhancing Kuapa’s communication across its membership. As such, Kuapa Kokoo began working on a new partnership with the Ghanaian government’s Non-formal Education Department to pilot basic literacy and numeracy classes targeted at Kuapa’s women members.

This was in response to research findings that low levels of literacy and numeracy amongst Kuapa’s female membership were acting as a barrier to these women participating actively in Kuapa Kokoo business and putting themselves forward for positions of leadership.

In the first phase of the pilot, 22 cocoa farmers from nine Kuapa communities participated, of which the majority (77%) were women. Over 60% of the learners had benefited from less than a year of formal schooling and thus were unable to recognise letters of the alphabet or write their own names. Following five months of classes, most learners were able to read simple passages, write simple sentences from memory, and work out simple sums. For many women, this translated into increased confidence and ability to perform day-to-day tasks, such as writing their names on attendance lists at Kuapa society meetings and reading the weight of their cocoa on the buying scales.

Mary Owusu, one of the learners from Sikaman society in the Ashanti region, remarked:

“Attending the class has boosted my confidence because I can now read. Today I was able to read the name of my community and the regional capital, Kumasi. I competed for this current election and I am now the vice president of my society. I’m now confident to stand for any leadership position in Kuapa.”

In the second phase of the pilot (ending in June 2016), 274 members attended literacy and numeracy classes, of which the majority (69%) were women. Members took part in classes tailored to their educational background and interests. As a result of the classes, learners again found day-to-day tasks easier and gained confidence. For example, members reported being able to help their children with homework, having the ability to read instructions on a fertiliser container or medicine bottle, and completing basic accounting for their small businesses.

In addition to the two income streams farmers receive that are connected to Fairtrade (minimum price & a premium) and the dividends Kuapa Kokoo receives from co-ownership, 2% of Divine’s annual turnover is invested in a Producer Support and Development fund (PS&D). This directly funds specific Kuapa projects, with a proportion also going towards projects with farmers in other areas of Africa. These initiatives are aligned with the UN’s Sustainable Development Goals and include projects such as delivering training, helping with governance, and promoting gender equality and land rights.

The PS&D programme is delivered in association with Divine’s partner Twin and Twin Trading Ltd., a major shareholder and founder of Divine Chocolate Ltd. Twin is a pioneer and leader of the fair trade movement, working to build better lives for the poorest and most marginalised in the trading chain.

Creating a World Where Chocolate is Cherished By Everyone, Including Cocoa Farmers

In March 2017, Divine Chocolate welcomed to the United States Mercy Zaah, a cocoa farmer from Ghana who was visiting as a representative of Kuapa Kokoo, the farmers’ co-op that co-owns Divine Chocol...

In 2015, we began supporting an intensive program in two Kuapa districts in the Western Region, where most of Ghana’s cocoa is grown. The aim was to make an impact on farmer livelihoods by increasin...

Grown only in the tropics, the oil from the oil palm tree is used prolifically, hidden in food products, detergents, cosmetics and even bio-fuel. Palm oil’s prolific use is partly because it off...