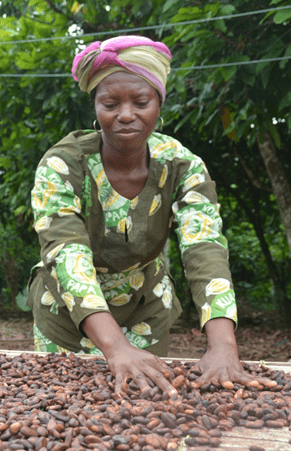 Margret Fianko lives in Aduyaakrom in the Western region of Ghana and has been a member of Kuapa for since 2001. She is a mother of three, and she shares a seven acre farm with her husband where the majority of land is dedicated to cocoa production. Margret says “the best thing about being a Kuapa member is that they assist women a lot,” something of which she is taking full advantage.

Margret never went to school but has been a participant in a Divine-funded numeracy and literacy program managed by Kuapa Kokoo and facilitated by Ghana’s Non Formal Education Division. “Before the course, I couldn’t do anything; I couldn’t read and couldn’t write,” Margret explained. “But now I can recognise letters, and I can read."

She is also putting her newly learned numeracy skills to good use to record the expenditure and income of the market stall she runs. She was proud to report that she now knows how much money she makes and only spends the profit. Margret’s ambition is to one day be elected as a Kuapa Recorder and is making good progress towards learning the skills necessary for this position.

As a member of a Kuapa women’s group, Margret is also part owner of a one acre community farm. When her women’s group first formed two years ago, the members were encouraged by Kuapa to start an income-generating activity. They chose a communal farm where they grow eggplant and okra which are sold in the local market.

Being a part of a women’s group also means that Margret has received training in the production of liquid soap and screen printing; these serve as other income-generating activities that supplement the income she achieves from cocoa production.