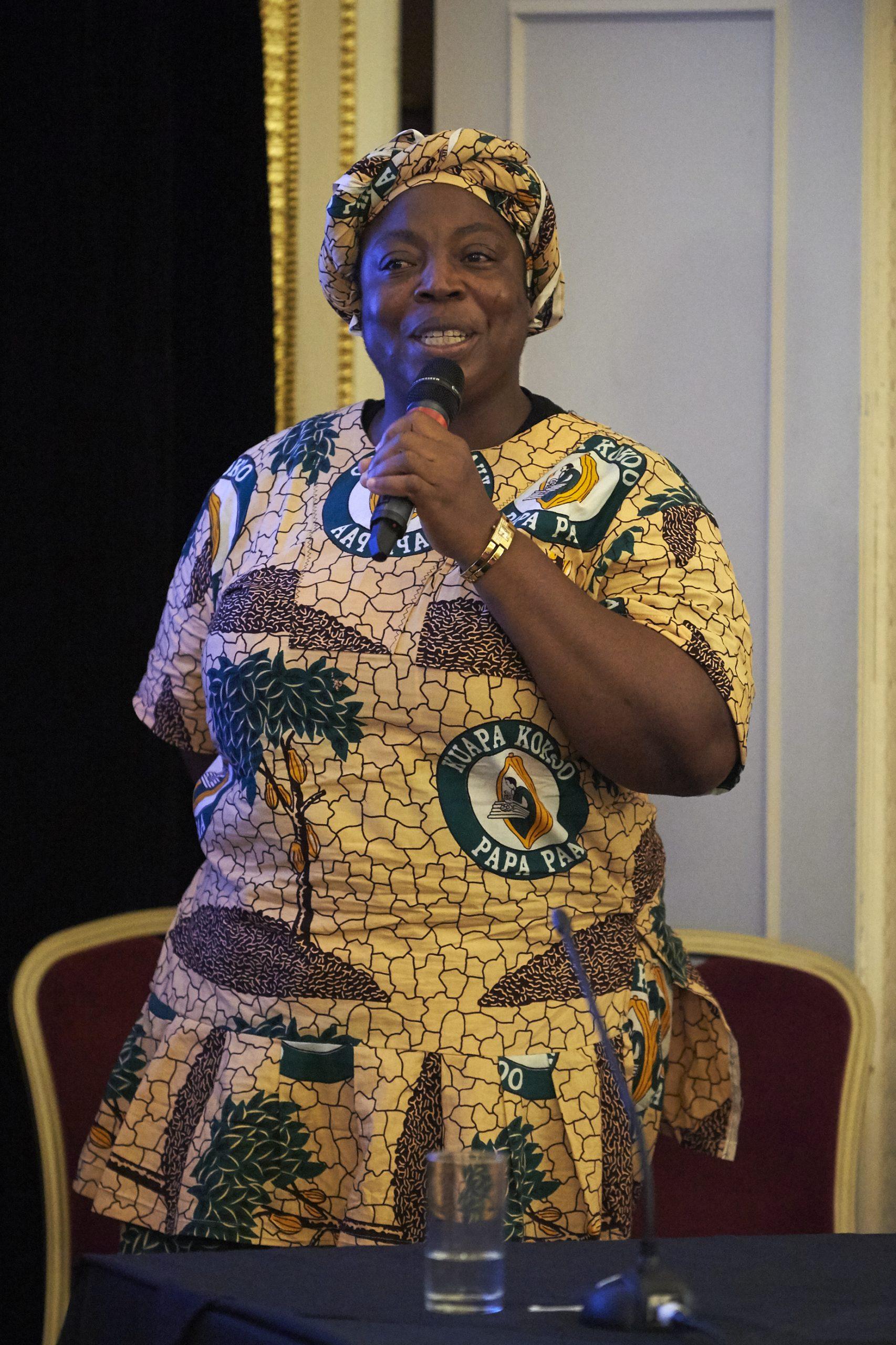 In August 2014, she was elected as the Porter on the National Executive Council (NEC).

Her village is Bassingele in Bibiani District, located in Western North Region, one of the most productive regions in Ghana. Her district is made up of 30 village societies, and they delivered 21,500 sacks (1,343 tons) of cocoa in the 2013-2014 year.

She is the elected Recorder in her village, and last year she bought 1,800 sacks of cocoa from her 94 members in that year.

Having seen the ways in which the co-operative empowers women, an elderly person suggested that Linda join Kuapa Kokoo. After joining, Linda began working in a “sub society” and enjoyed the benefits of receiving a cutlass and company-wide Fairtrade bonuses. She also attended the annual general meeting (AGM) and appreciated the chance for everyone to gather and enjoy themselves.

On the topic of joining the NEC, Linda says: “I am happy to join. I like having a plan before we go out and talk to the farmers, and I am pleased to be part of the final decision-making for the farmers.”

Linda also expresses her satisfaction for Kuapa’s approach to gender. “I am able to take a stand,” she explains. “My exposure to the gender program gave me confidence.”

Linda’s husband is a teacher in a Junior Secondary School, and it has been an exciting and exhausting time for them both recently. Shortly after the election in late October 2014, she had her 4th child, Nathaniel Elias. Linda’s other three children are also boys. Linda says Nathaniel will be her last because she needs to look after her health. Her eldest son loves playing soccer, and he supports the Heart of Oak Accra team. At the time of Linda’s interview in 2016, he wanted to be a doctor and was studying science.

Linda likes playing the board game Ludo with her children, and she loves singing church songs (“Definitely not hip hop!” she notes).

Linda also farms cassava and plantains to sell and to eat. Her favourite food is fufu in palm nut soup (abenkwan).

Linda’s first experience with chocolate was when it was brought to the AGM by Divine Chocolate staff. She said it was “very sweet and palatable” and expressed her pride that it was made from cocoa supplied by Kuapa.

What does papapaa mean? The farmers in the Kuapa Kokoo Co-operative are very proud of their cocoa beans. So proud, in fact, that they call them 'papapaa' which means, 'best of the best'!