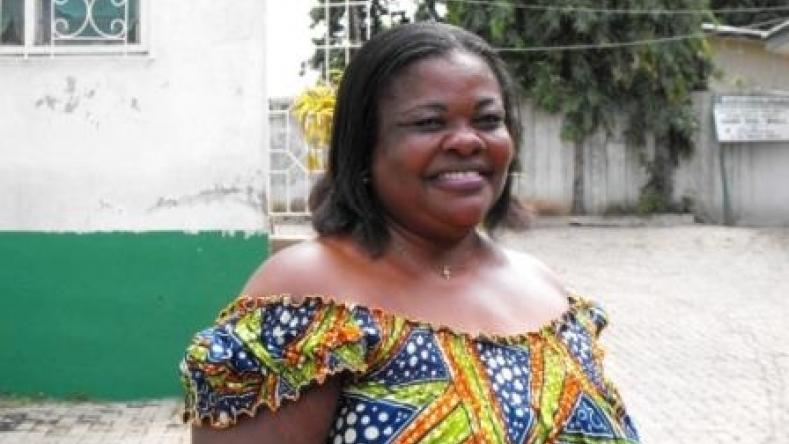 Hello, my name is Christiana Ohene-Agyare. I am the recorder of Kwabeng Kuapa Kokoo Society and the National Treasurer of the Union. Being a member of Kuapa Kokoo has taught me that whatever a man can do, a woman can also do and even better.

The position of recorder is traditionally seen as a job for men but I realized I could perform that job better than the men and so I contested for it and won about 80% of the votes! I have been appointed chairperson of the planning committee to organise this year’s Annual General Meeting which will be held on the 29th and 30th of July. This is a very big task but I am up to it!

The AGM is the biggest event on the Kuapa Kokoo calendar! Over 2400 representatives from the various societies will be attending. We will also get the chance to decide on various projects for the coming year. I must say that I have enjoyed a lot of benefits from Kuapa Kokoo and Fairtrade: Today, I am better able to look after my family- my two children are all in school. My daughter is in her final year at the Takoradi Polytechnic pursuing a course in Marketing. My son is also at the University of Science and Technology. I was able to put them in school because my income level has improved over the years.

My village, Kwabeng, also has a borehole that was built with Fairtrade funds. We do not have to walk long distance to fetch water anymore... there is clean portable water in the heart of the village. I particularly like being a member of Kuapa Kokoo because it is very democratic. Every farmer is able to contribute their ideas when we have meetings.

In Ghana, farmers are normally not consulted before decisions affecting us are taken. They just assume that farmer would like one thing or the other. Most of the time policy makers get it wrong! Kuapa Kokoo however, offers farmers an opportunity to decide for ourselves. I am very proud to be a member of a cooperative that co-owns Divine Chocolate. Two members from Kuapa sit on their board. It is unique! I do not know any other organisation in the world that has this kind of business relationship. People all over the world know Kuapa Kokoo because we co-own Divine and we are very proud of our chocolate company. I wish to entreat more people to buy Divine!

When you are a farmers’ co-operative with 85,000 members, many of whom are almost illiterate, living in village societies spread all over the Western and Central regions of Ghana often deep in t...